Last year the Royal Mail launched a competition to design a set of stamps honouring the achievements of British people during the coronavirus pandemic.  His Royal Highness the Prince of Wales has announced the eight overall winners and we are absolutely thrilled to confirm that Year 10 student, Rafi Valle Martin, is one of the incredibly talented artists who has had his thoughtful design approved by The Queen and issued as a stamp. 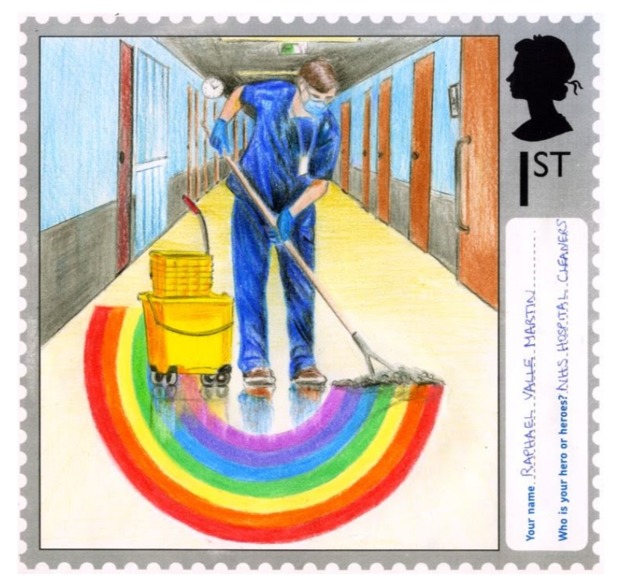 Usually stamps are issued to honour the achievements of famous British people, including scientists, explorers, writers and artists, but since the coronavirus pandemic began there have been many people who have done great things. These are the people who have helped the country through a really difficult time and these are people who are depicted in the competition.

By succeeding in this competition, as well as seeing his inspirational design on a stamp, Rafi has attended a ceremony at Clarence House to meet HRH Prince Charles. He said ‘When I created the artwork I never dreamt that I would be one of only eight winners out of 606,000 entries.  It was a surreal experience to meet our future King and I can’t wait to see my stamp design on letters.’

Rafi has also won a £1,000 prize for the school. Head of Art, Ms Kublik, said ‘As soon as we saw Rafi’s piece we had a feeling it would go far! We were so impressed with not only the beautiful quality of his skilled composition, but also the thoughtfulness behind his design, and his recognition of NHS cleaners and the work that they do to keep a hospital running. We are exceedingly proud of him!’

Congratulations also to all 606,049 children who entered, as their designs contributed towards a GUINNESS WORLD RECORDS™ title for the largest postage stamp design competition.