In any career 33 years in an organisation is a hugely significant achievement, but particularly in the ever-changing world of education, to continually develop your skill set and retain a passion for your subject is remarkable.

When the school held a leaving celebration for Mr Beard, Headteacher Ms Simpson remarked upon his phenomenal creativity in helping students, that thousands of students have benefited from his kindness and expertise and how his departure will be a huge loss to colleagues.

Head of Science, Mr Brady, remembered "His enthusiasm for Science is contagious and the learning experiences he offered to students were second to none.  Martin is renowned for making something out of nothing; I recall that once we needed a Rubens' tube and he disappeared only to re-appear later with one made out of blackboard rollers, a large pair of rubber gloves and a jubilee clip, saving the school £240!  Nothing is too much for him, if you want something done it gets done very quickly and we will miss him hugely."

After a glass of something special to celebrate and a toast in his honour, Mr Beard expressed how he felt privileged to have enjoyed his job for so many years, working with boys who were really interested and enthused by what they do and he observed in his usual wry manner "Being a Science Technician is like playing with toys all the time." 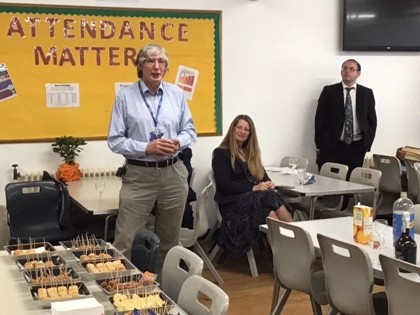 When asked what directed him into Science, he explained that he had always asked 'why?' and whilst his mother had initially answered the questions it had always driven him to enquire more. He reminisces of starting as an experimental biologist and finding so many interesting things to do – one getting him into trouble as a young teenager, when he marked bees (with a paintbrush and a steady hand!) to study their movement pattern within his garden.

Looking back over the decades and considering how things have changed, Mr Beard observes how studies have moved from classic experiments about heat and light to a huge interest in subatomic particles and how learning about astronomy black holes has moved from the theoretical to mainstream science, using footage from the Hubble telescope which has made such a difference to our understanding. A high point in his role was taking a school trip to the Large Hadron Collider in Geneva, although he doesn't recall the 25hr round trip so fondly!

His departure was not felt immediately though, as since his retirement last week Mr Beard has been in every day since!  We are delighted that he will continue to support the DT department when required as a temporary technician and we wish him many happy years of retirement building things in his garden shed or dining table.