What an incredible year it has been, packed full of challenges and excitement.  This term has seen a very successful activities week with over 600 students away on residential trips in seven different countries.  The students returned clearly having had a great experience and I would like to thank all the staff involved for their time and commitment to activities week.

This term Year 12 students took part in a Soapbox challenge to help raise funds for Hospice in the Weald and Ellenor. Their entry was amazing and we are all exceptionally proud of their achievement – they narrowly missed-out on overall victory! 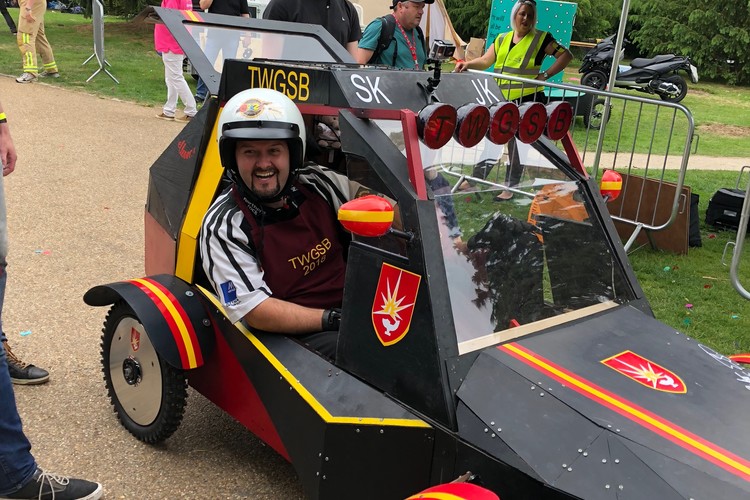 Awards afternoon gave us a more formal opportunity to celebrate our students and their outstanding achievements across the curriculum and beyond. It was lovely to see some of our former students return from their first year at university to collect awards. They all spoke about how well TWGSB had prepared them for university and how much they have enjoyed their first year.

Sports day was an absolute highlight, it was great to see parents supporting and enjoying the action as much as we were.  Eagles triumphed for the overall winners’ cup, every house should be proud of how they competed and supported all involved.  It was particularly pleasing that the staff relay teams gave the sixth form a real run for their money.

Work on the expansion plans will continue throughout the summer, planning has been delayed slightly as we work to ensure the provision is the best we can possibly achieve for the school.  As always we will update you as the process moves forward.  At the end of any academic year a number of staff move on to pastures new, whether that is a new post, career or retirement.  To those staff who are moving on, your contribution to the school is valued and much appreciated.  We wish you every success for the future.  I am delighted to say we are fully staffed and have made some great appointments and look forward to welcoming our new colleagues in September.

As I look back on my first year at TWGSB I feel immensely grateful and extremely fortunate to work with such a committed staff and a truly delightful student body.  They have made every day a joy and there is no greater privilege than to watch young people develop, learn and grow.  I would like to take this opportunity to thank the staff, students, governors and parents/carers for your welcome and support.

We wish you all a safe, sunny and relaxing holiday.

This Year we had another very successful week of in school activities and trips.

Year 7 visited the new Wonderlab at the Science Museum and thoroughly enjoyed the hands on science activities they also completed the Rye Maths Challenge.

Year 8 had a day of team building challenges at Bedgebury. They were involved in Disaster Relief workshops, as well as Drama and Art sessions.

Year 9 had trips to the RAF Museum at Hendon and Thorpe Park. In school Year 9 had a very thought provoking introduction to Shakespeare and a workshop provided by the RAF.

Throughout the week students were encouraged by different Departments to try new skills or challenges and all students had a varied and engaging week. 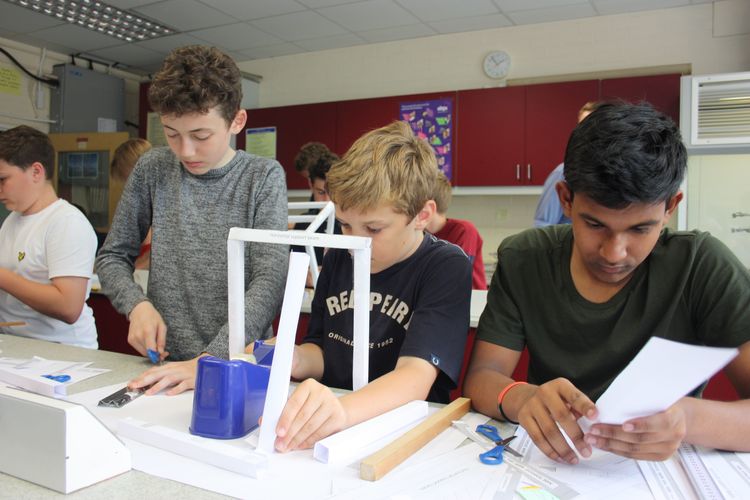 Early on Friday morning over 200 Year 7 students boarded five coaches and headed off to Lésigny, just South East of Paris. The excitement throughout the journey was palpable. The PGL chateau where we stayed is famous for hosting the Brazilian football team during the 1998 World Cup. During the week, we visited The Musée de l’Air et de l’Espace. Here, the boys were able to see over 150 different types of planes, including Concorde and a Boeing 747, and observe life-size models of the Ariane 1 and 5 rockets. We watched a medieval knights’ show in Provins – a UNESCO World Heritage Site. The Legend of the Knights mixes equestrian acrobatics with magic in the shadows of the centuries-old ramparts (the commentary is in French). The boys enjoyed a coach tour of Paris on the night France made it through to the World Cup final. Much to everyone’s relief, Mr Humphrey and Mr Bance managed to arrange for us to watch the England v Croatia game in an air-conditioned marquee. The trip to Disneyland the following day amply made up for the disappointment of the football result. 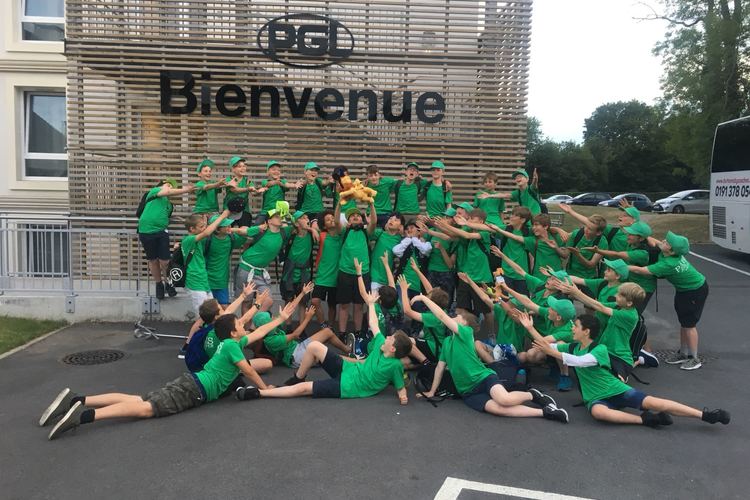 50 students from Years 10 and 11 and five staff headed off to Iceland during Activities Week.  There were a number of highlights, with the walk up Eldfell Volcano, the trek on the Solheimajokull Glaicier, visiting the Secret Lagoon, watching the Strokkur Geysir erupt and hearing the thunderous roar of the Gulfoss Waterfall all helping to bring Geography to life in a way the classroom can’t. The students were terrific both in their engagement and enthusiasm for the activities themselves. 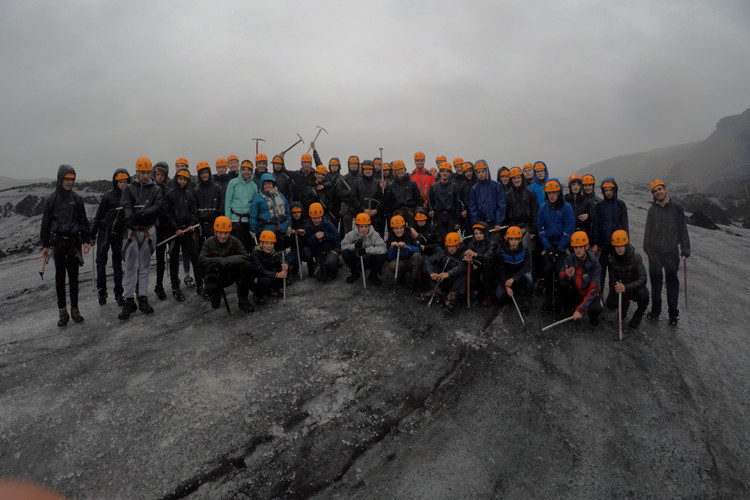 As many of you know this has been my last term at TWGSB before I return to Australia in August. It has been such a pleasure to work with so many fine musicians over my 5 years at the school. Congratulations to Mr Joris who will be taking over my role as Head of Music from September. He has already been busy this term taking students to Tunbridge Wells Care Centre where they entertained the residents one morning. He would love to create more performing opportunities in the wider community so please contact him if you feel there is a suitable occasion for some of our musicians.

The highlight of my year came last week when I accompanied 53 boys and 5 staff came to Barcelona for the bi-annual Music tour. The students made me incredibly proud with the 3 concerts that they gave, despite having to go on stage one night as England was being defeated by Croatia in the Football.  Our days were spent touring the region and taking in the sites of Sagrada Familia, Camp Nou, La Ramblas, Barcelona Zoo and PortAventura World. It was an experience that none of us will ever forget.

Thank you to all the parents, students, staff, and peripatetic teachers, who have worked so hard and supported my time here at the school. I will miss you all and wish you the very best for the future. 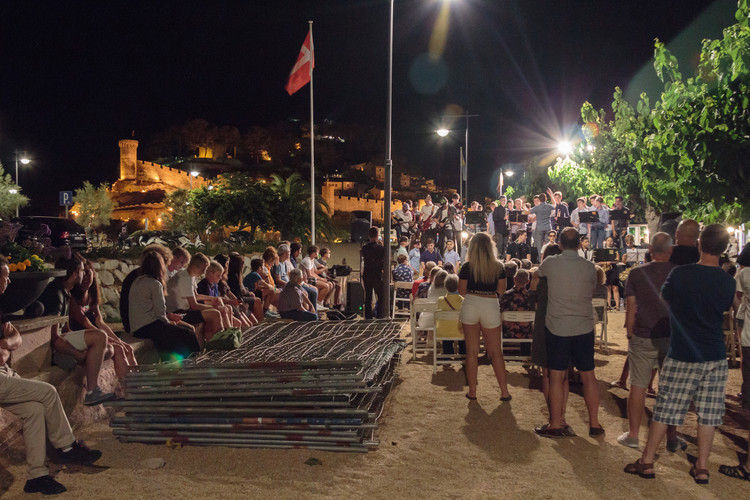 Our journey started at 4am on Monday but it was worth it. The activities were tailored for every pupil and they seemed to enjoy all of them. This year, for some reason, the most popular was the flamenco lesson. We could hear the boys clapping and stepping even on our way back at Heathrow airport trying to remember the steps. Some other activities which were included this year were a tour of the Bernabeu Stadium, Warner Bros theme park, cooking lessons, Kung Fu taster lessons, bull fighting lessons in one of the most famous schools in Madrid ‘La Casa del Juli’, and all of them were delivered in Spanish… According to some comments, they also enjoyed the Spanish lessons which were fully immersive and conducted in small groups. We even saw the England vs Croatia match in Spanish but unfortunately the end was not great! 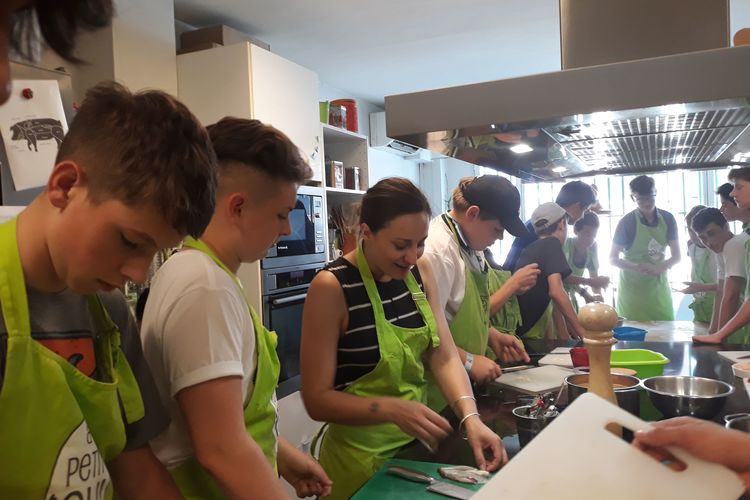 What an absolutely fantastic Berlin Tour! We had four full days of History and focussed on Nazi Germany and the Cold War. The guide delivered lots of extra content which was specifically designed for our exam as well as detail and challenge for those students that want the highest grades. Although there were times when we were serious, thoughtful and sometimes angry and upset, at Sachsenhausen Concentration Camp, for example, we also had lots of laughs. Bowling was great fun, the hotel had a games room and the comments and art work on the remains of the Berlin Wall were sometimes hilarious and a little strange. We can't wait for our next trip and are hoping to be able to take more students next summer. 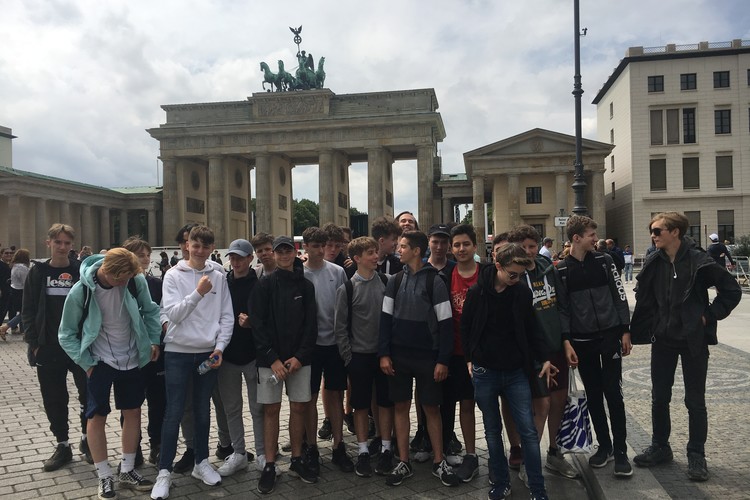 The trip to Athens was a hugely enjoyable experience for both the students and the teachers. Some of the standout moments and sites were the Acropolis with the Parthenon, Delphi and the huge amphitheatre we visited. On our trek up the Acropolis, it was hard not to consider that thousands of years ago, many others made their way to the top in order to worship the Greek gods in the Parthenon, paying tributes and sacrifices in order to satisfy them. Looking at the architecture, art and buildings, it’s amazing to think about the creativity and innovation that went into them – the huge columns, beautiful statues and the acoustically satisfying amphitheatres. One of the more incredible activities was visiting the ancient Agora of Athens, where famous philosophers of the past, such as Socrates and Plato would have spent much of the time teaching about philosophy and ‘corrupting the youth’ of the day. We were also able to have a bit of down time in the evenings, visiting the local markets and even though it was a disappointing occasion - being able to catch England’s loss to Croatia in the World Cup.

Over all the staff and students had a fantastic time and would encourage anyone to go and visit Greece, if not for the historical sites, then at least for the weather! 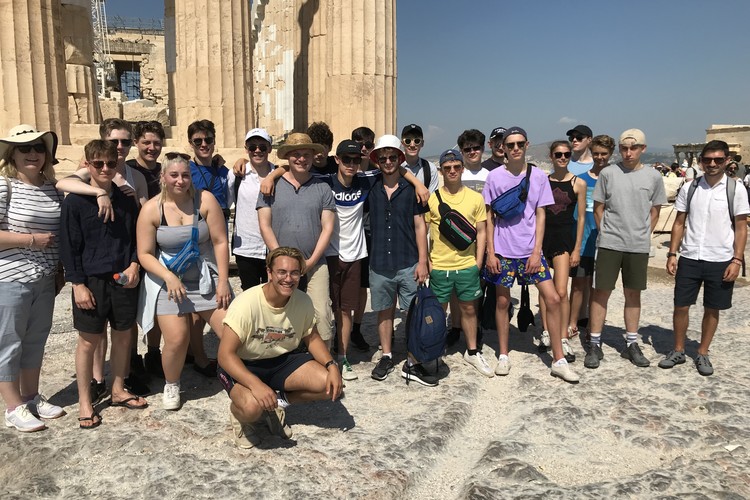 The art department ran a series of workshops for KS3 students during Activities Week.

Year 7 students spent their day working with clay; they covered research and design tasks before putting their ideas into practice & creating some excellent clay animals of their own design.

Years 8 and 9 were given the opportunity to work with Mono-Printing. They extended their themes from this year’s Art lessons creating design collages as base ideas which they then used to make a series of mono-prints - the Year 8s working around the topic of Architecture and the Year 9s with the theme of Distorted Portraiture.

Ms A Kublik, Head of Art 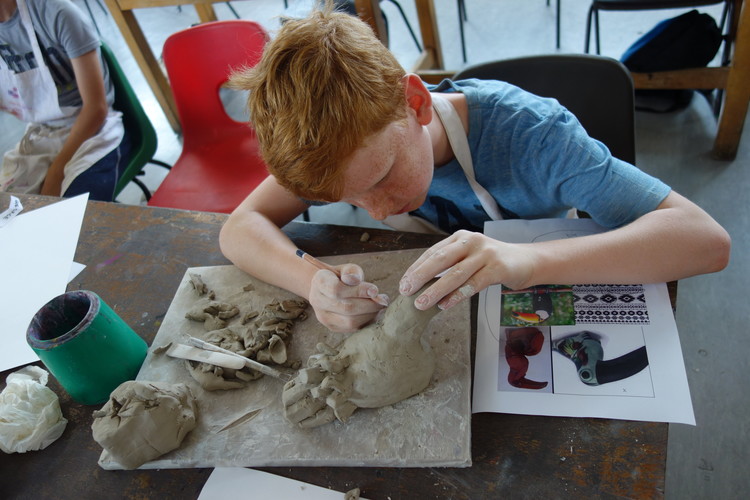 Year 8 went to Bedgebury Pinetum as part of the Activities Week programme. 42 students spent the day taking part in team-building exercises. In the morning they made shelters and completed command tasks which included the ‘Hanoi Tower’ and ‘Snake Pit’ challenges. In the afternoon, the teams competed against each other in an orienteering competition. 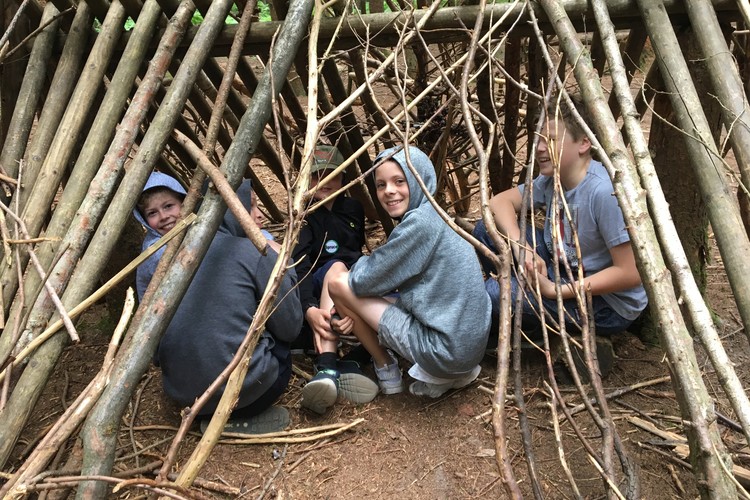 We are extremely proud of our 35 Carnegie Shadowers, who this year took a clean sweep of prizes at the Annual Carnegie Shadowing Balloon Debate with TWGGS, Skinners’ and SKA. Skinners’ hosted the event on the 18th of June. It was a wonderful convivial morning and all the schools enjoyed getting together to discuss books, catch up with old friends from primary school and eat a mountain of cake.

Prizes went to the following boys who were part of the winning debate team: Cameron Jones 9M, Tom Appleby 8F, Archie Fisher 8E and Nick McLean 7F. Together with their teammates from Skinners’, TWGGS and SKA, they argued that Release by Patrick Ness should win the Carnegie Medal for Children’s Literature. Release was a controversial book to be included in the shortlist due to some explicit themes but as a heartfelt coming of age novel, many of the students could relate to in one way or another. (read more)

Year 12 EPQ students carried out undergraduate style research at Sussex University this week demonstrating impressive focus and independent learning, even in the heat!

This week, Years 7, 8 and 9 took part in the Amelix Kent Police Roadshow. The roadshow delivered a very credible message around E-Safety, the dangers of Sexting and encouraged the boys to think carefully about the consequences of what they post online. In addition to playing interactive games, watching videos and talking about various E-safety issues from Sexting to Cyber bullying, there was a performance from an up and coming music artist.

Last but not least: a lovely photo from the Year 7 Trip to Romshed Farm last week. Amongst many other things, they learnt about the provenance of food as well as the challenges and opportunities of both organic and mass produced food. 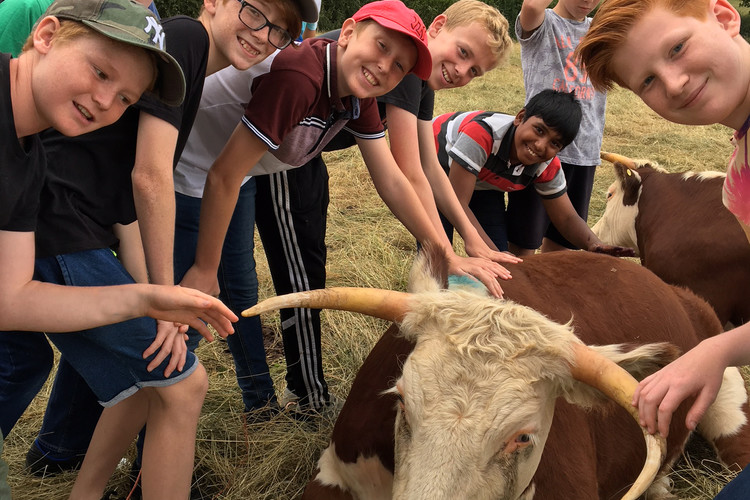 Enjoy the Sports' Day photos below.